"As Told to Julia Neville" is a series of imagined conversations between Julia Neville and some of the women who she ‘meets’ in the course of her researches. The conversations are based on items originally featured in archives and local newspapers.

It doesn’t get any easier on the feet. Canvassing, I mean. This council election will be my fourth, and of course I’ve been canvassing for many years for my husband George, and for myself at Guardians’ elections. I am a very old hand at it! Now we have quite a system, and a stalwart team of helpers - the St Budeaux Amazons they call us.

They’re a bit of a chore, the elections this year. Nothing like the excitement we’ll have next year with the new Equal Franchise Act in place and a General Election to use it in, as well as the council elections. I only wish we could get more women to stand in council elections. We need more women there – it should be half and half, but there are still only seven of us. We don’t always stick together, but we can do when we need to, as we’ve been doing in our campaigns for women police. As I told the council, we women will continue to seek goodness and high ideals such as purity, justice and right for all. They tried to shout me down, but I won’t let them intimidate me.

When we first formed the Plymouth Citizens’ Association in 1919 we intended to stand as independent candidates. And so I did, that year. But it didn’t really work. You need backers if you’re going to get onto the committees you want – a lot of horse-trading goes on, and independents are very much out of it. Then the political parties began to put up women against independent woman candidates. So now if there’s a woman standing, no matter for which party, if she’s a PCA member we offer her support. The PCA operates across all parties and none.

There are no independents on the Council at all nowadays. Even George and I, though we’d always been independents in local elections, have decided to join the Conservatives. Several of our old Liberal colleagues took up with Labour, but neither George nor I could do that. As George said, if there was one thing we didn’t want to see it was a Socialist State. So now, when I stand, I stand as a Conservative, but I have always made it absolutely clear that in matters relating to St Budeaux I remain an independent.

Yes, I’ve been working for St Budeaux ever since we moved out here thirty years ago. The old village and all the new housing had just been absorbed into Devonport and there were really no public services to speak of. What a fight we’ve had since then to get the authorities to pay proper attention to the developments that this place needs! Proper public transport. Gas mains. Street lighting. New schools. A library. Tennis courts. And the hours I’ve spent trying to get the borough engineer to deal with the problem of the dreadful smells wafting over from the Camel’s Head refuse tip. ‘Vamping’ him, the Western Morning News calls it. Why do they always accuse women of using charm rather than reason?

Anyway, soon, very soon, we hope to be connected up to mains electricity and what a difference that will make to the household chores…

Dr Julia Neville is an Honorary Research Fellow at Exeter University. She is currently leading the ‘Devon in the 1920s’ project, a research collaboration between Devon History Society, Devon Family History Society, the South West Heritage Trust and The Box, Plymouth. 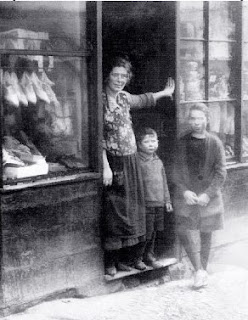